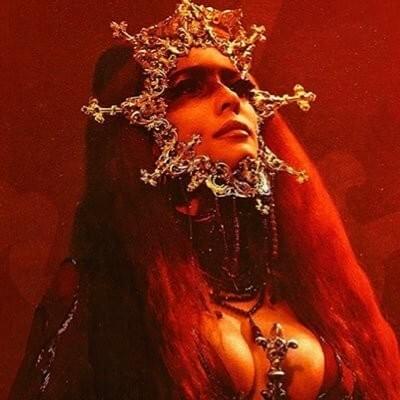 After this post, I promise we will take a break from Halsey for a little bit, despite how much I love them. But for now, I wanted to dedicate this post to Halsey’s most recent album, If I Can’t Have Love, I Want Power. This album, released in August 2021, explores “the joys and horrors of pregnancy and childbirth”. To be honest, when Halsey announced the album with this description, I was a little wary because I obviously can’t relate to those themes. However, when the album was released (no singles!), I was once again enthralled, and Love and Power soon took over as my favorite album by her. I, along with a lot of Halsey’s fan base, feel like I’ve been waiting for them to release a pop punk album for her whole career. For those who don’t know, this album was produced with Nine Inch Nails’ Trent Reznor and Atticus Ross. The production of this album is probably my favorite thing about it, but of course I love the haunting lyrics as well.

Along with the release of a thirteen track album, Halsey went one step further and released a film by the same name. The film follows Lila (portrayed by Halsey), who’s husband, the king, has just been found dead. Lila soon finds out she is pregnant, but the people of the kingdom want to replace her as queen. Lila decides to ignore the council and goes to party with her friends, but gets lost on the way home. Lila finds herself in a cabin in the woods with a strange woman. Lila eventually finds her way home and pretty much just waits around to give birth. She is haunted in her dreams by a mysterious dark figure, known as the Lilith. In flashbacks, it is revealed that the king was abusive towards Lila, so she poisoned him. The kingdom’s council reveals that Lila is to be executed after she gives birth, and if the baby is a girl it will be executed with her. If the baby is a boy, he will be raised as king. When labor starts. Lila returns to the cabin in the woods and the strange woman coaches her through the birth, but the king’s men follow her. Lila is captured and executed, but the Lilith (also played by Halsey) avenges her by killing the king’s men and the council, taking the kingdom for herself. Lilith takes the baby as her own and the film ends.

Love and Power, to me, is not only about pregnancy and childbirth, but also about how women in general are ignored and dismissed. In addition, the production of the album reminds me of a fantastical, almost medieval setting, especially The Tradition and Bells in Sante Fe. My favorite song on the album is Honey, closely followed by Girl is a Gun. Darling, Ya’aburnee, and 1121 are much softer and sweeter songs compared to songs like Honey and Girl is a Gun. I can honestly say that I love every single song on this album and could happily listen to any of them at any given time.