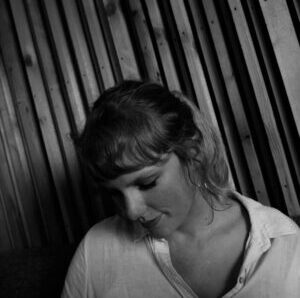 Considering she is my favorite artist of all time, I can’t believe I haven’t written a post about Taylor Swift yet. So, I am going to write about my favorite albums by her (don’t make me pick between them!) A mere eleven months after her seventh studio album, Taylor Swift did a surprise release of her eighth album, folklore. Then, only five months after that, she surprise released her ninth album, evermore. In August of 2019, Taylor released Lover, and in September announced a tour that would commence the next summer (2020). However, the tour (LoverFest) was cancelled due to COVID, as is the story for many artists. But Taylor did not use the pandemic as a sign to slow down and take a break from music, instead she created a recording studio in her bedroom. She wrote her next album, which would go on to win Album of the Year at the Grammy’s, Taylor’s third win in the category. On July 23rd, 2020, Taylor announced that folklore would be out at midnight. In the announcement posted to her Instagram, Taylor said “Most of the things I had planned for this summer didn’t end up happening, but there is something I hadn’t planed on that DID happen.” Folklore was Taylor’s first alternative album, another genre shift after she already switched from country to pop with RED and 1989. On December 10, 2020, Taylor announced evermore, the sister record to folklore. Taylor said she, Jack Antonoff (producer), and Aaron Dessner (producer) “just couldn’t stop writing songs.” As many people say, evermore is the “unhinged” younger sister of folklore.

Since folklore was released so soon after Lover and was a product of the pandemic, it was nearly impossible to guess what it would sound like. I remember clearly the day it was announced, I pretty much just bothered my mom all day and made her listen to it with me at midnight. I did my best to guess the theme of the album based solely on the cover and announcement post, and I was almost right in thinking it would sound like Taylor’s song Safe and Sound (feat. The Civil Wars), which was written for the first Hunger Games movie. Both this song and folklore have a dreamy, woodsy sound to them, but folklore far surpassed any of my wildest dreams (that was an accidental Taylor reference, I swear). The cardigan music video was beautiful, and nothing will beat the feeling I got when I heard Taylor say Rhode Island (my home state) in the last great american dynasty. My initial favorite song was mirrorball, which I still love so much, but my favorite song forever is seven. As Taylor describes it, seven explains the feeling of being a child who just wants to throw a tantrum over the simplest thing. The lyric “love you to the moon and to saturn” is my favorite thing I’ve ever heard, and now my mom and I have matching moon and saturn tattoos. I love the storytelling in folklore, how songs like cardigan, august, and betty interconnect and reference one another to tell the story of a teenage love triangle. Although the songs have an air of sadness to them, folklore always makes me happy when I listen to it.

As I said earlier, evermore is folklore‘s younger, wilder sister. If I could compare them to to Taylor’s earlier works, folklore is to RED as evermore is to Speak Now. Another common comparison for the albums is that folklore is more sonically cohesive, each song connects to another, but evermore has better individual songs. My memory of evermore‘s release is also very clear, I again made my mom listen with me. We put the lyric videos for each song on our TV, and started with the willow music video, which was a direct continuation from the cardigan video. Evermore made me more emotional than my initial listen of folklore, specifically the songs champagne problems, marjorie, and cowboy like me. When no body, no crime came on, I was obsessed and I still am. Out of this album, I found my favorite song of all time: ivy. As with many things I love, I have declared my affection for ivy with a tattoo based on the song. I designed it as a skeleton hand holding a human heart, wrapped in a vine of ivy, on my ribcage/side. Many fans think ivy is based on the life of Emily Dickinson, which I have to agree with. Ivy is such a heartbreaking song, but it will stay my favorite until Taylor makes something better.

Unlike almost all of Taylor’s previous albums, folklore and evermore are written about fictional people and situations. And no, Taylor does not “only write about her ex-boyfriends” (see The Best Day, Mean, Innocent, Never Grow Up, The Lucky One, and so many more). That is a tired, misogynistic exaggeration that I will talk about another time. While it is true that Taylor draws from her life experiences for inspiration in her songs, folklore and evermore weren’t her first foray into storytelling through music. Love Story, written on Taylor’s bedroom floor when she was sixteen, was her take on Romeo and Juliet with a happy ending. Although her personal life can be seen in folklore (my tears ricochet, epiphany) and evermore (marjorie, long story short, coney island), these albums, and even the mentioned songs, are still mainly comprised of escapism fiction that we all need during the COVID pandemic. These albums are possibly the only good thing to come from COVID, and I am thankful for them every day.