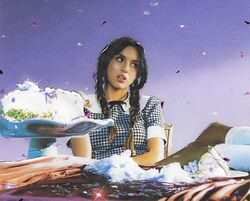 In January 2021, driver’s license was one of the most played songs in the world. Although Olivia Rodrigo was well known for her performance on Disney Channel, her debut single skyrocketed her into the spotlight. In April, she released deja vu which was also a hit, but good 4 u was the only thing that reached the same success as driver’s license. It is well known that Olivia grew up as a fan of Taylor Swift, so that’s how I discovered Olivia’s music. The influences of Taylor Swift, Billie Eilish, Lorde, and more are easy to identify in Olivia’s music, which I personally enjoy because I love music from all of them. SOUR was long awaited for those who knew Olivia from Disney channel, and it did not disappoint.

Considering Olivia Rodrigo is a few months younger than me, it is truly astonishing how much she has accomplished just in her teen years. The good 4 u music video, with influences from The Princess Diaries and Jennifer’s Body, is a big reason I fell in love with the song. My favorite song is favorite crime, but traitor is my favorite sing-along-in-the-car-lose-your-voice song. Hope ur ok, the closing track of the album, makes me tear up every time I listen to it, specifically the lyrics “I hope you know how proud I am you were created, with the courage to unlearn all of their hatred”. As with all albums I love, I love every song and I hope to get a tattoo for SOUR at some point.

In June of 2021, a month after SOUR was released, Olivia Rodrigo released a music video/live performance of almost the entire album, called SOUR Prom. Since COVID was still a high risk, Olivia was unable to go on tour but she still wanted to perform the album. Although I was a little saddened that favorite crime wasn’t performed in SOUR Prom, it was still really cool to experience with other fans. Now that COVID is slightly better, Olivia is going on tour this coming summer. Unfortunately, I was unable to get tickets because the venues were small and resell prices are extremely high. I still look forward to seeing the setlist, Olivia’s tour outfits, and hopefully she will follow in Taylor Swift’s footsteps and release a tour movie someday.