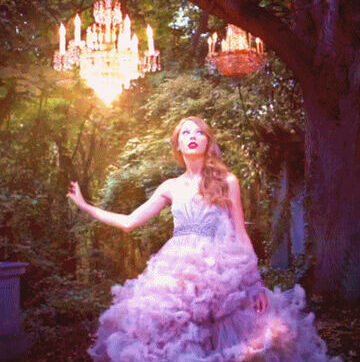 Fun Fact: The original title for Speak Now was Enchanted, but Taylor’s record label made her change it.

In arguably Taylor’s most badass era (yes, even more so than reputation), she coined the saying “I don’t think you should wait, I think you should speak now.” A major spark for the album Speak Now was a critic saying that Taylor had no songwriting talent and only did well because of her co-writers. Well, Taylor was having none of that, and released an album that was entirely self-written. And it was her best yet, and still my favorite to this day. The song Mean was a direct message to the critic to be more careful with his words, but the the entire album having no co-writers was even more proof that he had no clue what he was talking about. Something Taylor consistently points out in the music industry is how men (and even some women) try to tear down female artists when they begin to gain popularity and success. Ever since Fearless made Taylor Swift the youngest person to ever win the Grammy’s Album of the Year (until Billie Eilish), people have tried to diminish her success (I’m looking at you, Kanye West). People love to claim that Taylor “only writes about her exes” (which she does not), but so what if she did? Why is it so frowned upon for someone to write about their experiences in life? Misogyny. As her song The Man points out, if a man were writing the same exact songs, they would get nothing but praise for it.

The Better Than Revenge Controversy

I suppose since I am discussing how Speak Now as a whole was an iconic feminist moment, I should point out that the song Better Than Revenge is pretty much the opposite. The song goes after a girl who “stole” Taylor’s boyfriend, which is a very misogynistic view because the man in that situation made that decision, the “other girl” didn’t necessarily do anything wrong. The song also has quite a bit of slut shaming, and some have even requested that Taylor not include the song on the rerecorded version of Speak Now. I am not one of those people. I actually love the song, and many fans of it joke that we “turn our feminism off” for the duration of the song. All jokes aside, if people can ignore every misogynistic thing that artists like Machine Gun Kelly say in their songs, Taylor deserves a break for a song she wrote over ten years ago. She has grown a lot since then and always admits that she has more growing to do.

My Favorites and Dear John Background

Fun Fact: Only now is Taylor Swift the age John Mayer was when they dated.

The title for the Speak Now album was originally supposed to be Enchanted (also a track on the album), but her record label (aka Scott Borchetta, ew) made her change it because they thought it didn’t fit the theme of the album. They were wrong, but Speak Now is still a great title. My favorite song on this album changes a lot, but the top three are always Sparks Fly, Haunted, and Mine. Mine is very nostalgic for me because I remember watching the music video when it came out. Sparks Fly was my favorite for many years, but Haunted has become a newer favorite after watching the Speak Now tour movie, which is a masterpiece. Honorable mentions include Dear John, Last Kiss, Long Live, and Back to December. The reason I say this album is more badass than reputation is because even though Dear John is sad, it’s also an obvious callout to John Mayer and how badly he treated Taylor during their relationship. Although a Dear John is a letter sent to end a relationship, its obviously about John Mayer because Taylor only just turned the age that John was when they dated. He was 32, she was 19. I’m 19 and I could not imagine dating someone that much older than me.

Click the image above to listen to the Speak Now World Tour Live album!